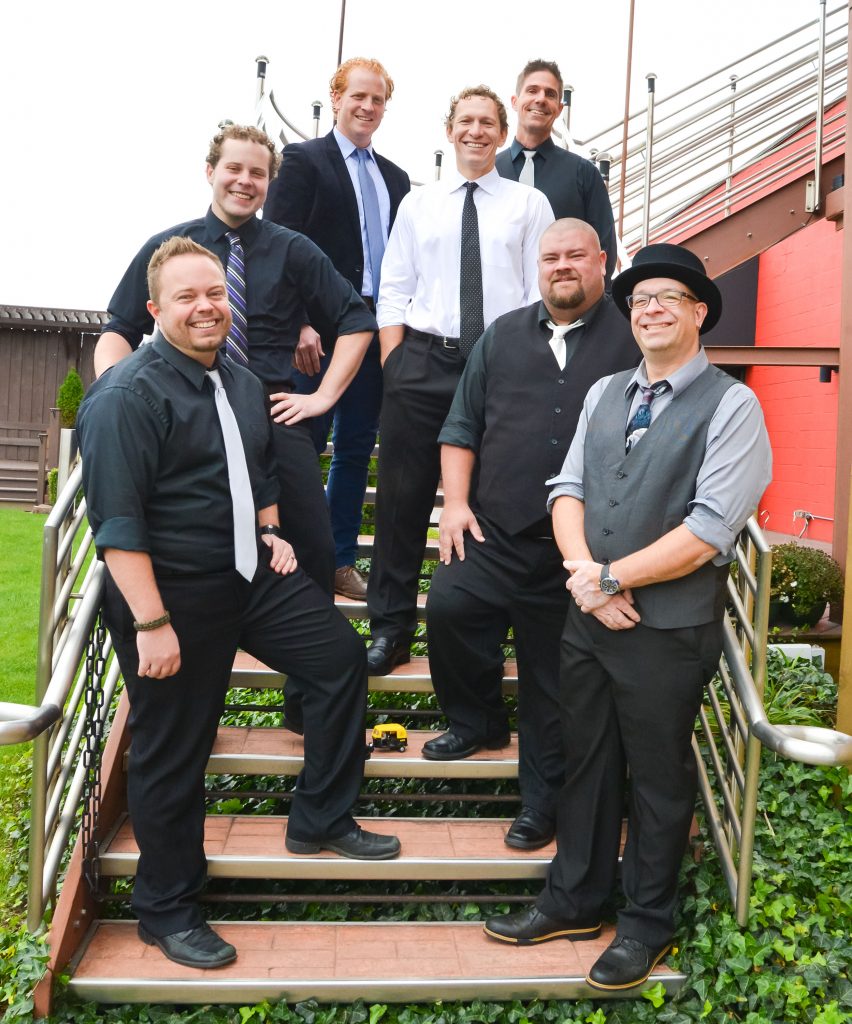 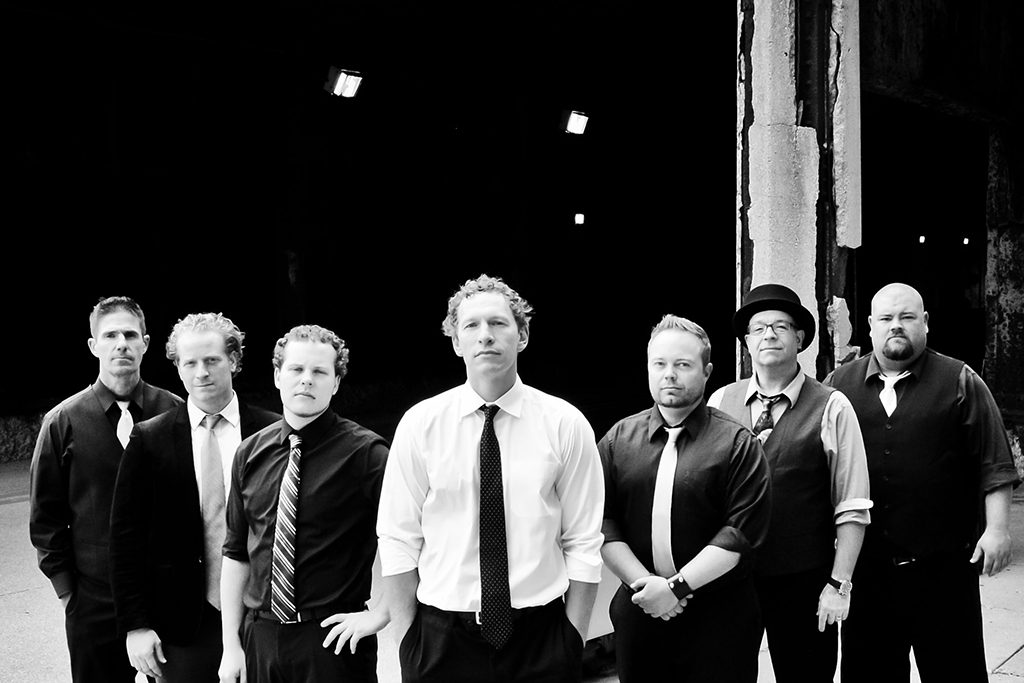 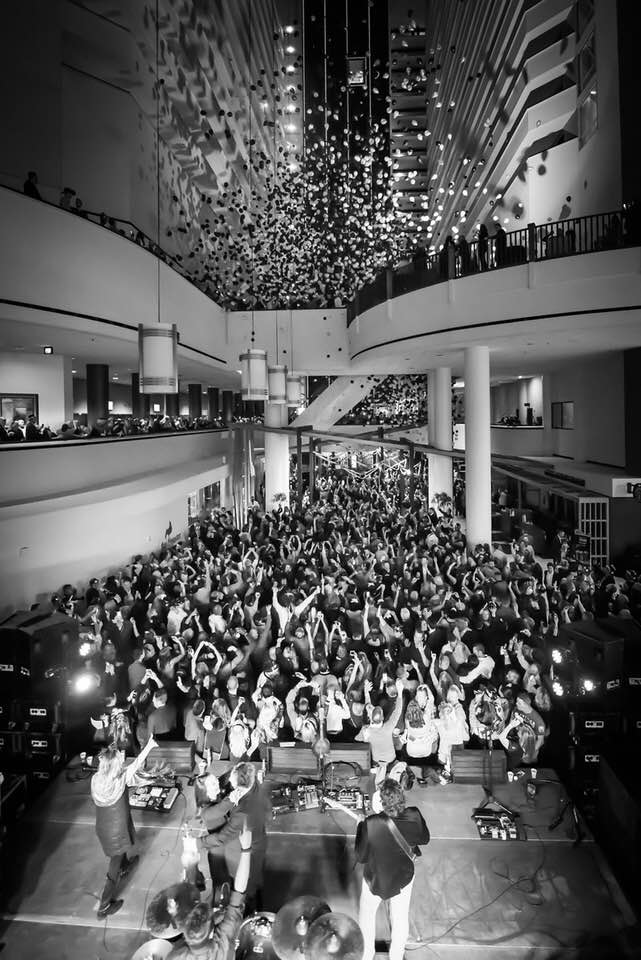 Let My Yellow Rickshaw “boldly take you where no cover band has gone before!” Since 2009, this rotating group of friends, neighbors and musicians have been entertaining folks around Indianapolis with humor, variety and seamless covers into every show. From Taylor Swift to Timberlake, Zac Brown Band to Alabama, The Temptations to Van Morrison, Cyndi Lauper to Guns ‘N Roses, TLC to Usher, plenty of top 40 and hip-hop, and even an Irish jig or two, you will hear musical selections from the 1950’s to today’s current hits. With a refreshing lineup of sounds that includes fiddle, mandolin, upright bass, harmonica and melodica (what’s that, you ask?), My Yellow Rickshaw will take you on a unique and hilarious journey at every show.

Founded in 2009 by childhood friends Nathan Klatt, Eric Maitlen and Steve Hueber, the band name gets its origin from Eric and Steve; while spending an extended period of time on a mission trip in India, Eric and Steve befriended a rickshaw driver named Gopal Singh, who quite aptly, drove a yellow rickshaw for a living. It’s quite the bizarre tale, but absolutely true – hence the name, goofiness and overall sense of joy/happiness that exudes from the band.

Now in 2018, the band continues to play on a regular schedule, at a variety of events and locations. While seasons come and go, players may leave or return, success may ebb and flow, the band will staunchly stick to its grassroots beginnings and principles: 1. Humor and fun music 2. Always bring the “Joy-factor” 3. “Faith, Hope, and Love . . . . And the greatest of these is Love.” 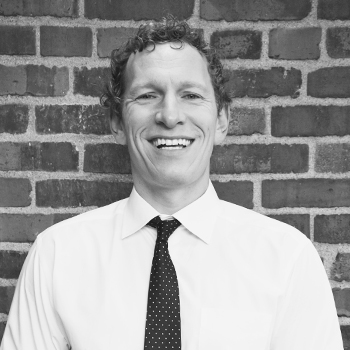 If this were a VH-1 documentary, it would start like this:  “At the tender age of 7, Nathan’s father walked him into the local arts council, and upon hearing the sweet sounds of Suzuki volume one violin notes ascending atmospherically into the air, caused the magical zenith where fate and destiny irrevocably intertwined . . . ” Buuuut — this is not a VH-1 special.  MYR doesn’t write any of its own music.  We don’t have a record deal; can cover bands get record deals?  I’m the big guy with the bucky-beaver teeth and big ears who plays the little instruments.  For four years, I lived with my guitarist/best friend Eric, his wife Jillian (how many women you know are cool with that?) and their 3.5 pound Chihuahua Harvey.  There’s nothing like taking a walk shirtless with your best friend through the mean streets of Geist with a Chihuahua prancing beside you, I suggest you try it.  Finally after 4 years, Jillian and Harvey kicked me out, so I now live in the even meaner streets of Fishers with my wife Caitlyn, our kitty Sophie, and our Sega Genesis, with Mortal Kombat 1, 2, and 3  — can you say winning? 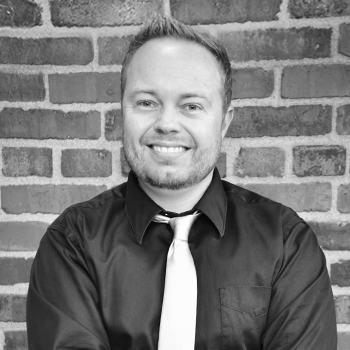 Jeremy was born and raised in Hartford City, IN.  He taught himself to play drums with one arm at the ripe ‘ole age of 11, after seeing a Def Leppard video on MTV and thinking, ‘How hard can it be?’ He continued playing as he attended Indiana University and earned his degree in Psychology while minoring in Thumb War Strategy.  He graduated with 5.0 GPA on a 4.0 scale, joining Chuck Norris as the only other man in history to do so.  He currently lives with his wife, two sons and invisible dog Wherejago in their humble home in Fishers.  Little known facts:  Jeremy was crowned National Thumb War Champion for the ’05-06 and ’08-09 seasons.  Jeremy also finished 2nd in voting for the “Most Interesting Man in the World” competition, losing only to the Dos Equis Guy (much of Jeremy’s bio is not true . . . or is it???). 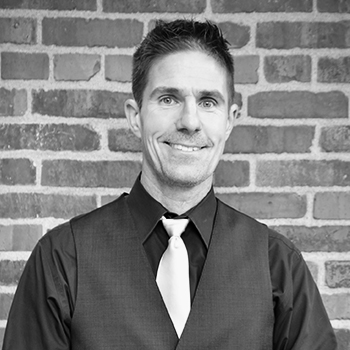 Jonas is the most recent addition to the band, typically hanging out behind the keyboards.  You can tune a piano but you can’t tuna fish.  His playing and singing have been described as “crisp like lettuce.”  (Friend says what?)  Though he’d rather be playin’ a gig with the band, he’s not afraid to play some golf on a Tuesday.  I guess he has learned the art of sucking it in and digging deep.  He likes his cats.  They have cat-like reflexes. 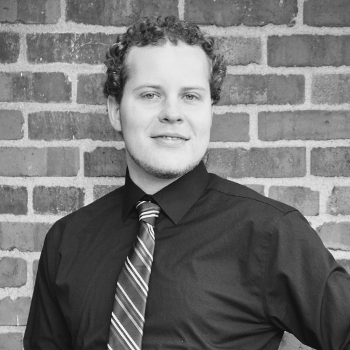 “It has been speculated that E=MC2 – if that is true, then Steven Lott possesses more energy than one of Nathan’s voluminous biceps.”  — Rick Stump

Your typical self-proclaimed number one cover band has the stereotypical audio engineer controlling the dials for a band — ponytail, chain-smoker, nervous twitching of fingers as he hides anonymously in the back of the room, trying to control the feedback of the snare drum. Not our Steven – you are more likely to see him dancing to the snare drum, taking pictures with the “girls night out” crews, his mini-fro glistening in the lights, while mixing the perfect show. Steven is not a “sound guy” – he’s an expert of audio engineering. Honing his technical skills for the past decade, Steven brings a vital skill-set to MYR. His energy is palpable and vibrant as he takes pictures of the revelers, smiling and dancing himself to the beat. You won’t find a harder working or loyal man than Steven Lott! 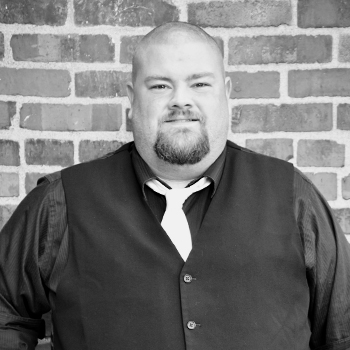 Straight outta Compton, er, I mean North Central High School, Fitzy honed his chops practicing hard-core music and playing worship music at his Baptist church as a kid.  Behind his teddy-bear aura and smiling visage, there is a burning desire to play the drums with purpose and passion.  You will see him whaling away on the drums at many shows, grinning from ear to ear and wearing his classic collection of Donkey Kong t-shirts.  He’s handsome, he’s hilarious, he’s Fitzy! 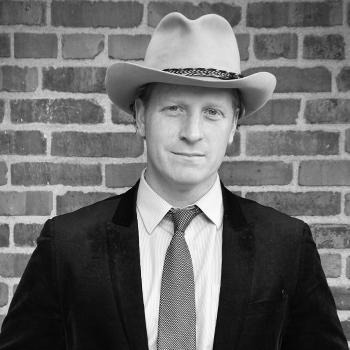 Rick joined the band in 2012.  Surprisingly enough, he is one of the top 2 best guitarists in the band.  He lives on a farm with his smokin’ hot wife, 7 kids and 23 animals.  He arrives to shows mysteriously, elliptically orbits the stage playing inconceivable guitar solos, and vanishes without a trace like a blue dwarf star.  He is a glorious wonder of the Indy cover-band cosmos.  Donald Trump stated, “Rick is going to be Huge!  Rick will make Indy cover bands great again.”  In all seriousness, Rick is just an average guitar player and his voice cracks multiple times during a show, but He has a blast playing in the band.  MYR drummer Jeremy Lee stated, “we have a very busy schedule, and an extensive and difficult set-list, so finding another guitar player at this time is not our top priority.” 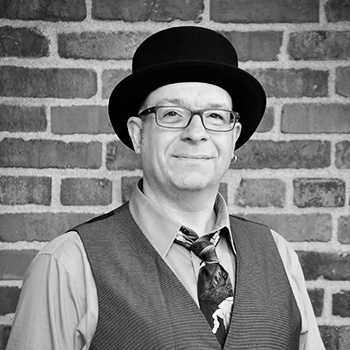 I love the bass.  I play my bass every day.  The band changed when I joined.